Dr. Oknah Kim Lah was a servant leader led by the hand of God. She dreamed of a better world and acted to make it real through volunteering. She made many great contributions to Korean society. Among them, she invested her private property in 1986 to establish Korea’s first volunteer organization, KAVE – Korea Association for Volunteer Effort, and operated it herself as a full-time unpaid volunteer chief executive officer. After her husband passed away in 1990, KAVE was expanded to Kakdang (her husband’s pen name) Social Welfare Foundation. Kakdang Foundation provided training and placement of volunteers in various fields, training leaders, and creating international volunteer cooperation activities. Her contribution to developing this organization into the most exemplary volunteer organization in Korea has become a paradigm for others.

Her dedication to volunteering started in 1952 during the Korean War. There are three major areas in which she has contributed to the development of volunteering in Korea. The first is the field of volunteer education and training. As she began her career as a high school teacher, she put great importance on the development of volunteer skills, nurturing excellent volunteers and leaders, and providing continuous education and training. With 20,000 trained volunteers, they are welcomed as the most trusted and competent volunteers at each site where they are deployed. KAVE also trained volunteer management leaders by inviting an American volunteer management expert in 1991 for the first time in Korea to provide training. In turn, those nurtured there are playing important roles as leaders of the volunteer organizations where they work. For these efforts, KAVE was awarded the President’s Citation for Volunteer Organizations.

The second major contribution is pioneering the field of volunteer work. Volunteers trained in counseling for delinquent youth worked in various youth organizations, including probation centers and juvenile detention centers. They listened to the concerns of the youth and led them not to go astray.

In 1987, hospice education was conducted, jointly with Yonsei University Severance Hospital, for the first time in Korea. Since then, the Kakdang  Foundation has held hospice education programs twice a year and has trained 6,000 hospice volunteers so far. Hospice education of the Kakdang Foundation is widely spread through churches, general hospitals, and Buddhist temples, contributing to the development and awareness of hospice.

Dr. Oknah Kim Lah, shocked by her husband’s sudden death in 1990, founded her “A Group that Thinks about Life and Death,” making the discussion of ‘death’ a public topic for the first time in Korean society. In addition to research on death, about 2,500 death preparation education leaders who have been trained so far are taking the lead in establishing a healthy death culture by working across the country. In addition, the ‘Writing an Advance Letter of Intent on Life-sustaining Medical Care Campaign’, which was first started at the private level in 2010, contributed to the establishment of the life-sustaining treatment decision system.

The third contribution is networking among volunteer organizations. Dr. Lah’s active participation in the founding of Volunteering Korea (VK) is a prime example. VK was established in 1994. Dr. Kang Young Hoon, the president of the Korea Red Cross, was persuaded by Dr. Lah to actively participate in the establishment of Volunteering Korea. In accordance with the Basic Act on Volunteer Activity of 2005 in Korea, Volunteering Korea has received national recognition.

To honor of her dedication, the Kakdang Foundation established “Okcheon Service Award” to celebrate volunteering and the outstanding volunteers. “Okcheon” is Dr. Lah’s her pen name meaning “clean water fountain.”

In March 1991, when I met Dr. Oknah Kim Lah for the first time, she introduced me to another organization, Daegu Volunteer Support Center. After we shared news about volunteering in Korea, she suggested that three organizations simultaneously celebrate International Volunteer Day (IVD) in Seoul, Busan and Daegu together with FOVE in Busan, where I served as the secretary-general. This proposal was soon accepted, and a poster was made and used with the support of IBM Korea. As far as I know, this is the first case of a company supporting the activities of volunteer organizations in Korea and the first case of sponsorship between a company and volunteer organizations. This commemorative event has been hosted by Volunteering Korea since its establishment in 1994.

Although Dr. Oknah Kim Lah is well known internationally through her activity as the World President of World Federation of Methodist Women (WFMW), she also contributed to the development of IAVE by attending and presenting her  volunteer work at the second world conference of IAVE in 1972 and the first Asia-Pacific (A-P) IAVE regional conference held in Japan in 1986. She was the first Korean member of IAVE and also served as a member of IAVE’s board of directors. Since 1986, either she or KAVE’s staff and volunteers have participated in almost every IAVE world and Asia-Pacific regional conference.

In July 1994, she recommended to IAVE that I be appointed as Asia-Pacific Regional Representative. I was elected, which gave me the opportunity to become deeply involved with IAVE. At the IAVE regional conference held in the Philippines, she also suggested that the next regional conference, in 1997 be held in Korea. This proposal obtained the consent of all participants and the permission of the IAVE World President, Margaret Bell. Seoul as the venue for that conference was announced at the closing ceremony. She also contributed to the success of the 1997 conference as General Manager and Program Director.

In addition, she valued international cooperation and networking. So, she arranged friendship visits and volunteer work through visiting exchanges with groups of volunteers, including Ms. Teruko Sasaki from IAVE JAPAN, and volunteers from Kaohsiung, Taiwan, including Huei Mei Hsu, from IAVE TAIWAN.

For her lifelong contributions to volunteering, the Girl Scouts and social welfare movements in Korea, she received many awards including the Korea Camellia Medal from Korean government in 2007. IAVE appointed her as an honorary Life Member at the 2016 IAVE World Conference in Mexico.

Dr. Oknah Kim Lah received two honorary doctoral degrees. She spent the last 70 years of her life as a volunteer, contributing to peace and friendship in society, the country and the world, and gave inspiration and hope to countless people. I wish her rest in heaven now.

Oknah Kim Lah’s life of 103 years could be summarized as, love of God, love of country and love of neighbors. Her dream was to make the world better place to live. She believed her dream could come true through volunteering.

Her dedication to volunteering started in 1952 during Korean war when she had to evacuated to Pusan with two little babies, her husband and mother-in-law. She sent a letter to Girl Scout of USA and requested to send a trainer to form Girl Scouting in Korea. Girl Scout of USA was deeply moved and not only dispatched a trainer but also raised fund to help her. She could travel to the United States and other European countries with help of so many volunteer workers of Girl Scout. She also learned great power of volunteering while she served as South Asia President and the World President of World Federation of Methodist Women between 1976 through 1986. It was natural for her to establish Korea Association for Volunteer Effort (KAVE) in 1986 when she completed her duty as the President of the World Federation of Methodist Women. She was 68 when she started and had led the foundation for 35 years until she died.

She is known as ‘God Mother’ of volunteering in Korea. Her relationship with IAVE started when she attended the 2nd World Congress of IAVE held in Manila, Philippines December 2 – 8 in 1972. “Learn through International volunteer Effort (LIVE) was previous name of IAVE. The theme was “Social Development through Volunteerism.” She also participated and gave lecture at the first Pacific Regional Conference (later the name changed to Asia Pacific) held in Nagoya Japan in 1987. KAVE started to celebrate Volunteer Day, December 5 designated by UN in 1988 for five consecutive years until she handed over to Volunteering Korea after it was formed.

She was a born leader. She was a pioneer. She was one of the first Asian women who worked globally. The title of her biography is her confession “Led by the hand of God”.

If you wish to share memories of Dr. Lah or send condolences to her family, please address them to her son, Jake Lah at [email protected]. 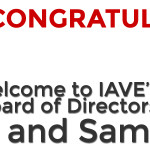 Welcome to IAVE’s Board Osama and Sam!
26 Comments 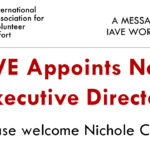 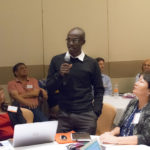