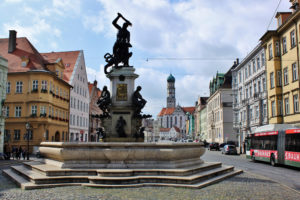 Over 2,000 years ago, the Romans established the city of Augsburg at the confluence of the Lech and Wertach Rivers. During this time, the city’s water supply came from the Singold, across the Lechfeld Plains, via open water channels. Augsburg has been using hydropower from the Lech Canals ever since the Middle Ages. The landscape of canals along the Lech, Wertach and on Lechfeld Plains developed somewhere between 764 and 1921 A.C. 29 canals with a total length 78 km, were diverted from the Lech and 4 canals, at about 12 km, were from the Wertach. Furthermore, 19 streams, totally at 46 km, were developed from the Stadtwald City Forest Park. The preserved canals and streams are monuments to industrial archaeology and are still used today generate electricity. 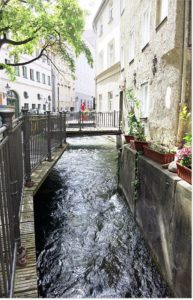 Drinking water and the needs of the city were successfully united into an exceptional system, both in function and aesthetics. It encompasses decorative fountains that are highly regarded across Europe, as well as buildings constructed for water management, whose role went far beyond functionality. In Augsburg, the practical purposes of the water management facilities were combined with strong artistic ambitions , with leading artists commissioned to create these architectural artworks. The city’s investment in these magnificent creations represents the high regard Augsburg has for water.

Augsburg has applied to become a site for the UNESCO World Heritage, with its proposal titled “Hydraulic Engineering and Hydropower, Drinking Water and Decorative Fountains in Augsburg“. 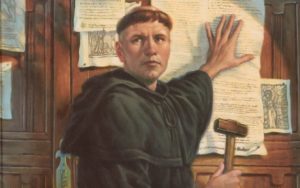 The history of the City of Augsburg is uniquely linked to particular stages of the Reformation and, thanks to Martin Luther, has become one of the pivotal points in the history of the Reformation. In October 1518 Luther had to come to Augsburg to revoke his 95 theses in the house of Jacob Fugger before the Roman Cardinal Legate Cajetan (1469-1534), but he did not. In June 1530, the “Augsburg Reichstag” was convened, in which the Augsburg Confession (Confessio Augustana), written by Philipp Melanchthon (1497-1560), was handed over and read to the Emperor Charles V in the bishop’s palace. This Confessio Augustana is the first comprehensive summary of the Lutheran faith and is valid as a Protestant confession until today. In 1548, Augsburg became the first equally administered imperial city in the Holy Roman Empire. This means that all municipal offices (city council, administrative office, municipal committee) were euqlly represented with one Catholic and one Protestant. Augsburg is thus considered one of the most prominent examples of the overcoming of denominational conflicts in Europe. In 1555 the “Peace of Augsburg ” was made up. For the first time in history, the basis for a peaceful and lasting coexistence of Lutheranism and Catholicism was laid down by law, and permanently granted the supporters of the Confessio Augustana free exercise of religion. 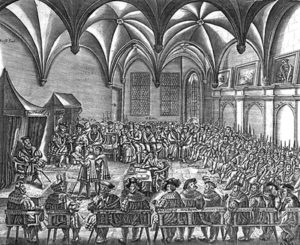 In memory of this parity, the “Hohe Friedensfest” has been celebrated continuously since 1650 for over 350 years every year on August, 8th, in Augsburg with a festival service of both Christian confessions, with a ‘Peace Banquet’ on the town hall square and with a children’s peace festival. Therefore August 8th is a public holiday only in Augsburg and unique in Germany. The “Hohe Friedensfest” is a practised symbol of the open and peaceful encounter of the culturally diverse Augsburg city society of different religious affiliations, origins and worldviews. In addition, the Augsburg Peace Prize, endowed with 12,500 euros, has been awarded every three years since 1985 to persons who have rendered outstanding services to a tolerant coexistence of religions and cultures.

Augsburg derives its current mission as a City of Peace out of its history and is committed to this special heritage in many ways. Augsburg still takes its historical responsibility very seriously: No one should be excluded because of his religion or origin! The Peace of Augsburg originally meant the peaceful coexistence of the two Christian denominations, today it means the social responsibility for living peacefully together in a multicultural and multireligious world and to »Live together, grow together!« in peace – according to the slogan of the Volunteer Center of Augsburg issued 20 years ago!

Provide your email below to get regular updates on the conference!