“Creating the moment and stimulating the dialogue” – that is IAVE’s goal for its convenings. We bring together diverse groups of leaders of volunteering in settings that encourage discussion, reflection and learning. Participants are invited to focus on specific issues challenging volunteering and on how to increase the impact of volunteering on the world’s most pressing problems. 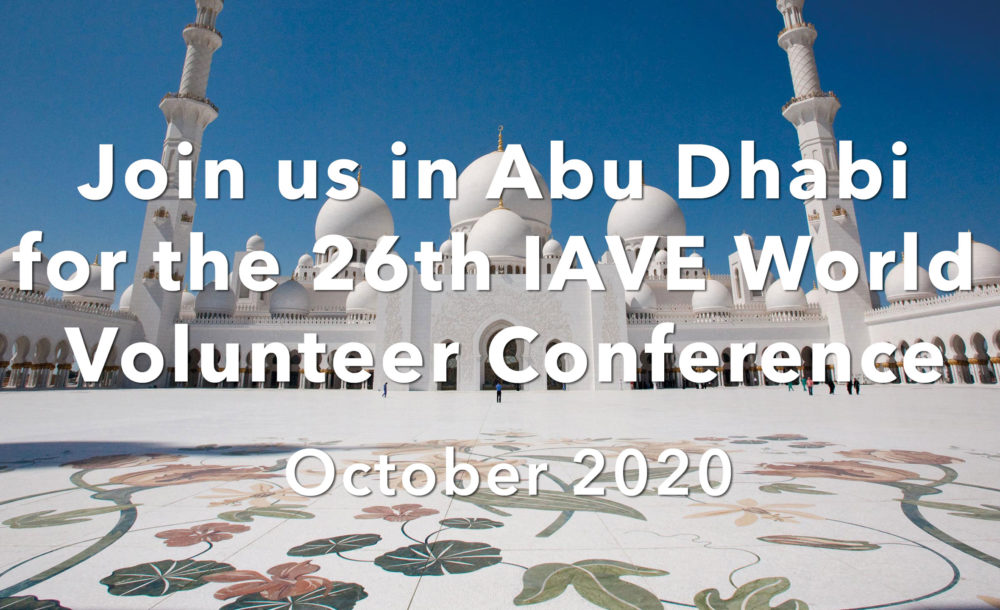 IAVE is pleased to announce its 26th IAVE World Volunteer Conference in Abu Dhabi, UAE. The conference will be hosted by the Emirates Foundation. This conference holds extra significance as it is also marks IAVE’s 50th anniversary, a key milestone for the organization.

In 2018, IAVE held its 25th IAVE World Volunteer Conference in Augsburg, Germany. The conference was hosted by Volunteer Center Augsburg. The online report for the conference is now available on our website. Click on the link below to learn more.

It all began in 1970 when IAVE was born from the vision of our founders that volunteers from throughout the world could come together to share their experiences, to learn from one another and to build bridges across cultural, political and linguistic barriers. The early meetings were known as the “LIVE conferences,” shorthand for “Learn through International Volunteer Effort.”

Since the first world conference in 1970 in Los Angeles, IAVE has convened 22 more times in world conferences. Twice in that time, the conference has deviated from its tradition of meeting in even numbered years – in January 2001 in Amsterdam to kick off the United Nations International Year of Volunteers (IYV) and in January 2011 in Singapore in celebration of the 10th anniversary of IYV.

The structure of the conferences always includes plenaries with challenging and inspiring speakers; forums that dig deep into challenging issues confronting the field; workshops that are designed to present new ideas, expose highly effective practices and stimulate participant dialogue; and, ample time to meet informally and to learn about the host country.

Below is a complete list of IAVE world conferences:

The IAVE World Youth Volunteer Conference has been held in conjunction with eight of the world conferences. Typically scheduled in the few days prior to the world conference, these are special opportunities for young volunteers, up to age 25, to meet together, volunteer together, learn and reflect together, and begin relationships that can last for many years.

Between world conferences, IAVE sponsors regional conferences. These are opportunities for more people to participate and to discuss both global and regional issues:

Regional conferences always include either a companion youth conference or integration of youth participants and presenters into the conference program.

Every year, IAVE holds one or more special convenings to focus attention on issues of significant interest to target audiences:

The World Summit for Youth Volunteering, held every 10 years, the first in Tokyo, Japan in 2001; the second in Barranquilla, Colombia in 2011.

The first Global Dialogue on Corporate-NGO Volunteer Partnerships, held in London in December 2012 with a focus on disaster settings, explored both the dynamics of partnerships and the role of corporate volunteers in the whole spectrum of disaster-related activities. View the report of this dialogue.

Youth, Volunteering and Employment, held in London in December 2012, explored how volunteering can help young people build skills, behaviors and experiences that will help them enter the world of paid work. View the report of this dialogue.

IAVE Forum on Corporate Volunteering Response to the Refugee Challenge was held in Berlin in May 2016, to understand the refugee crisis in Europe, learn how the private sector is currently responding through their employee volunteer programs, and discuss what companies could do individually or collaboratively to respond to the situation. The goal was to inspire new approaches, initiatives, partnerships and action on the refugee crisis. View the online report for this forum.

The Latin America Volunteer Leadership Summit will be held in Lima, Peru in September 2019. The summit invites volunteer leaders in the Latin American region to discuss various trends and challenges, catered specifically for the region’s volunteer community.

IAVE also regularly hosts convening of members of its key constituent networks – the Global Network of National Volunteer Centers, the Global Corporate Volunteer Council, and our the IAVE Leadership Network.

All IAVE conferences are held in cooperation with a local host organization that has been chosen through an open bid process. To express interest in hosting a future IAVE conference, please email [email protected] with information about your organization. IAVE only considers expressions of interest from NGOs that play leadership roles in support of volunteering. Inquiries directly from event management companies and venues are not considered.